iOS 15 | How It Will Affect Your Marketing | Infinity Nation

Have you heard about the upcoming iOS 15 update? This will have a huge impact on your business. Read to see the impacts & how you can limit the effects. 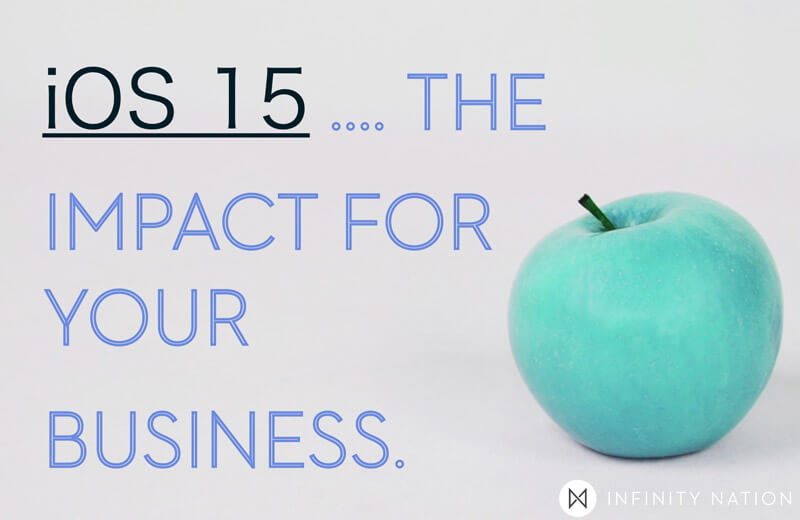 iOS 15 is coming out later this year and has recently been announced during the WorldWide Developers Conference (WWDC 2021), so let’s to take a look at the new iOS and how it could affect your business, especially your data!

iOS15 is set to be released in Autumn 2021. The Apple message has been that this will give users “more visibility” on using data. This will be done through Privacy Reports and allow users to dive deep into an app’s permissions and see what third-party websites it sent data to or contacted. However, one question that I always ask myself when updates like these are released.

Who guards the gatekeepers?

While it’s great that Apple wants to give us more control over our data, what we don’t have control over is what data Apple is keeping or using itself without the user’s knowledge.

Apple announced their Apple Wallet & Digital Keys function during WWDC 2020, which has still not yet been released. In addition, Live Text was announced: This allows a user (or Apple) the ability to scan a user’s library of photos for text that can be made searchable and copied and pasted across apps. Between this feature and the ability on Apple Wallet to store a photo of your ID/Driving License, should this not be a concern for users if they are really worried about their privacy? It feels like data on which sites were visited would be low on even the most risk-averse person’s scale?

2. How It Could Affect Your Business?

At the moment, no one is entirely sure what the final impact will be once iOS15 is released. This is partly because the data and analytics are all just projected figures, and we won’t know the full extent of the fallout until it is out of the beta testing and released to the public. Currently, iOS14.5 is still being incrementally released and the data is constantly changing with each new iteration, so your business won’t really feel the final effects until iOS14 has completely been released later this summer. This is having a major impact on Facebook Ads marketing and the effects are still being felt at this moment.

Regarding iOS15, our prediction is that smaller purchases will be the most affected for most businesses. This will be seen across various sectors as most customers often make smaller purchases without much consideration time. Therefore, they are more likely to purchase a product through an ad on their phone. We’ve also already seen with iOS14.5 that the overall tracked conversions have begun to drop in our Facebook Ads campaigns and we expect this to continue to happen as the adoption rates increase and iOS15 further increases users concerns of how their data is being used. Additionally, we’re starting to lose the ability to see the insights breakdown for conversion events to understand more about our audiences. But some platforms are already taking action by adding features like Modelled Sales (e.g. Facebook’s incremental conversions) to help combat against the data that has been hidden with Apple’s recent updates.

Finally, iOS 15 will likely affect your email campaigns as well. This is due to the fact that users will be able to control whether or not they allow the tracking data to report back regarding open email rates. However, as Click-Through Rate (CTR) can be used as a KPI, there could still be an option to shift focus from open rates to CTR as a way of monitoring engagement from email campaigns.

3. Potential Ways to Mitigate the Changes

First, let me start by saying, manage your expectations! There will definitely be a gradual decline across your data so all goals and targets will need to be adjusted accordingly. This will help because while some of the data could be unavailable for your customers, they will still be making the purchases and this data will not change especially for your loyal customers. Therefore, our top tip would be to invest even more in building loyalty with your customers before trying to use limited data sets to advertise your business to newer customers.

Furthermore, platforms such as Facebook & Google are typically tracked on a last interaction or click basis. Following this update, the uptake of users opting out of the tracking is likely to increase. Modify your KPIs to measure the whole funnel (e.g.) journey starts etc. will be key – it’s important that marketers begin to use all the data that is available to us. A few key metrics to measure, especially for your email campaigns, after the update (although you should already be measuring these figures right now) are revenue per subscriber and increased LTV as these will allow you and your business to have a greater understanding of your current audience and database. If you know what your metrics were like pre-iOS 15, then it will be much easier for you to notice the impact once the new update has been released to the public.

Finally, back up your current data as it contains metrics for both Apple and Android devices. After the update has been completely released, Android data will still be available. Therefore, if the current Apple data has been backed up and benchmarked, this data could be used to create more reliable data models which could, theoretically, predict the current Apple users using your site.

Get in touch if you are concerned about iOS15 affecting your business’ operations and we’ll help you navigate this new landscape!